James Bond Bay, Phang Nga Thailand. Is it worth it or not?

As absolutely beautiful as Phuket, Thailand was, if you are going because of the amazing pictures of Jame’s Bond Islands (otherwise known as Khao Phing Kan) like this one. 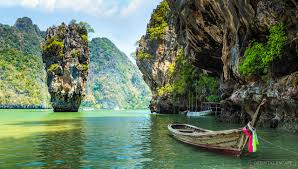 You may want to know a few things.

For starters. This island is considerably smaller than the photos make it look, much smaller. It is tiny and not what we were expecting at all. It’s only 66 feet tall. There are Christmas trees in Madison Square Garden that are taller than that.

And a second thing, something no one informed us about, even though we asked many times and I’d looked at dozens of tour options. It cost extra money just to be able to see it from this point of view.

I’d planned my trip to Phuket for over a year. I put the deposit down on the house we were staying in a full 16 months before we arrived. I researched information, tours, distances. The photos of Phang Nga were beautiful so I made sure it was high on our priorities list. It looks like something out of a Jurassic Park movie. We all hummed the theme at one point or another throughout the day expecting a pterodactyl to come flying off one of the islands. 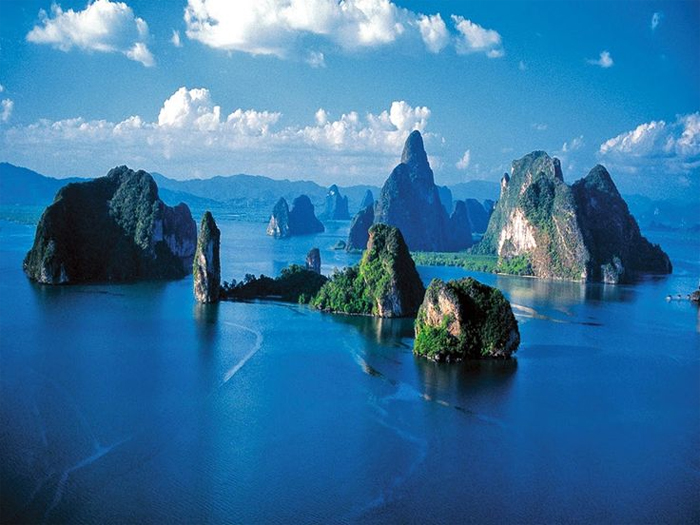 I ended up booking us a private charter because there were twelve of us in our group and we wanted to be able to control the day instead of being trapped on one of those tour boats unable to stop where ever we wanted and stay as long as we liked. Luckily for us, this ended up saving the day.

We loved being on the boat. It was comfortable, smooth, no one got sea sick and they served us one of the best meals we had the entire week. The crew was fantastic and we got some amazing pictures.

When we arrived at James Bond Island our captain took us to one side of the moon shaped island but we couldn’t see the tower or go any further. We knew our boat was too large to get close and had decided in advance that we didn’t care to go the the beach overlook. We just wanted to stay on our boat and enjoy the view. What we didn’t know was we couldn’t even see the bay unless we took a long boat to the island. It’s a national park and they don’t allow boats to go between the islands. James bond, that’s the tall tower island you see in all the pictures is in the middle of a half moon bay.

See below, the top of the image is where they make all the larger tours and private charters stay. They aren’t allowed to go around to the other side where you can actually see the James Bond Island. We also couldn’t use any of our drones without a permit for professional photographers. Which, fyi, take six months to get.

So we asked one of the long boat drivers how much it would cost to take us over to the beach, after all. James Bond is the main attraction for Phang Nga. It was a four hour boat ride just to get there, we weren’t about to miss it. Turns out is was only 50 Thai baht per person. Which was roughly $1.50 American. Great. Or so we thought.

We load up in the long boat, most of us leaving behind our bags and supplies. After all we were just going to jump on over to the secluded beach and take a few pictures of James Bond. We did have a fun time on the long boat for the short journey over that only took a few minutes. 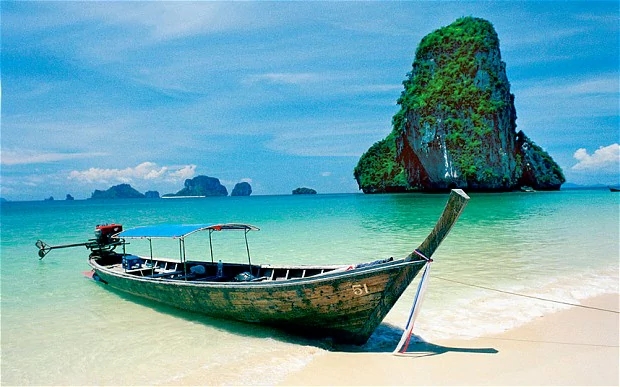 When we arrived our twelve man group gets shuffled over to this window. It was another 300 baht to get in. That’s only $9 for us but no one had brought extra cash, we’d left everything on our boat. We had asked how much and were told 50 so that’s what we grabbed. There were high booths lining the beach blocking the view of the bay and the island. We’d gone all the way out there, and agreed to take a long boat over to this tiny little beach that we didn’t want to go to in the first place and we couldn’t even see over the souvenir booths.

There were security stopping people from walking towards the opening at the end which was the only way to see the cove and the famous island that is the main feature in every Phuket, Thailand website and travel blog. As soon as it was clear the twelve of us didn’t have any cash to pay the extra 300 baht they become very rude, herding us towards the dock and trying to wave down the long boat that dropped us off. Yelling at us and pushing us away trying to get rid of us as fast as possible. One of the security guys even hovered over my friend, Ali’s shoulder as she shopped. They wouldn’t let her look at most of the booths, getting between her and the sales people trying to get her as far away from the shops as possible.

Once the long boat was able to get back to the dock the only place he could get to was near the end. One security guy even grabbed my shoulder and pushed me when I tried to just get a glimpse of the island, shoving me away from the opening. It was ridiculous.

Our long boat driver got the full story and felt bad for us so he took us completely around the bay and through the straight our charter boat was too deep to go through. We did get to see if from the ocean side and at a distance. This is one of the only pictures I was able to get from the water.

And bear in mind, this is much much smaller than it looks. So small we thought we were at the wrong island.

Thankfully, there are lots of beaches in Phang Nga and the views were amazing as we boated around. We are boat people, so it didn’t completely waist a full day and ruin the experience but having all the information would have changed a lot of things. We did end up at a beautiful spot on the way back with jet-ski’s and a bar. We jumped off the second story of the boat, swam around, playing in the ocean. We got these huge pinacolada’s in actually coconuts. The waiter was fantastic and kept asking us if they were strong enough. Of course we said no, so he just kept adding Thai Whiskey, which is actually rum until we were happy. Needless to say we were a bit tipsy on the way home.

If you are going to Phuket, Thailand and decide to take a day trip to Phang Nga, just know that this famous island, comes with an extra fee and you have to take a long boat to the beach just to be able to see it. You will need an extra $350 baht per person if you want to see James Bond Island.

It’s worth the trip just to see Phang Nga but I honestly would not waist my time trying to see this iconic image. This is not one of those ‘the picture doesn’t do it justice’ moments, if anything the picture is the definition of false advertising. Beautiful yes, but more disappointing than anything. Go to Phang Nga because it is awe inspiring but James Bond is not really worth the addition surprise charge of $10.50.

Feel free to ask any questions you may have and if you want to see more pictures from my trip to Phuket check out my Instagram @dashboard.destinations

Breaking News From All Over The World And India

Fueling the parenting universe with inspiration for family fun.

The Art of Blogging

a Canadian In Brazil

The Art Or Endeavour Of Being Lucid In A World We Live In... Secrets Of The Psychics... Energy, Universe, Futurism, Film, Empowerment...Digital Abstract Art Rendering...